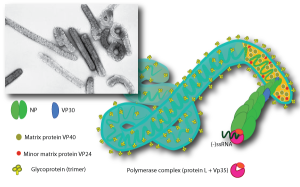 Currently there is no effective vaccine or drug treatment in use to protect against or stop Ebola virus infection. Drug candidates tested in the past or currently in development include inhibitor RNAs (iRNA) or antisense-based DNAs that recognize specific sequences in the virus genome. Proposed Ebola vaccines include ones in which Ebola  proteins are expressed in the vesicular stomatitis virus (3,4,7). While these interventions reduced Ebola virus morbidity and increased disease survival in monkeys, the surviving animals often showed severe Ebola symptoms. 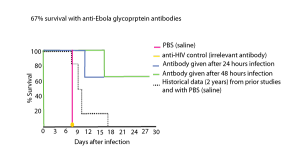 Passive immunization of manufactured antibodies or immunoglobulin derived from human serum have proven successful in the treatment of a variety of diseases which include cancers, autoimmune disease or infectious disease stemming from viruses or bacteria (1,6). A current cocktail of three antibodies that recognize the Ebola virus surface glycoprotein were shown to protect monkeys infected 48 hours prior with Ebola virus (2). These three antibodies were originally generated in mice and in order to remove any allergic reactions when injected into humans they were engineered to remove mouse immunoglobulin protein sequences and were replaced with human immunoglobulin protein sequences (5). While still experimental, this cocktail of ‘human-mouse (chimeric) antibodies (5) should prove beneficial in stopping the Ebola virus infection in Dr Brantly and Ms Writebol.
Cited references