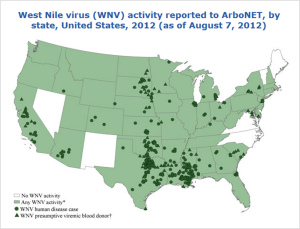 The southern United States, and in particular north east Texas , is now experiencing one of the worst outbreaks of West Nile virus (WNV) since 2006. So far this year, of the 241 WNV cases reported nationwide, 181 are found in Dallas county Texas.  Louisiana and Mississippi have also been hard hit by WNV. Louisiana health officials reported a total of 68 cases and six deaths, while authorities in Mississippi have reported 59 cases and one death. Other states reporting  higher than normal incidence of WNV include Maryland and  New York.

For most people who become infected with WNV there is no apparent illness or symptoms.  In fact of an estimated 80% of people who become infected, they never develop symptoms attributed to the virus. The remaining 20% who become infected do indeed develop WNV fever or flu-like symptoms, with clinical symptoms occurring 2 to 14 days after initial infection. Clinical illness includes fever, headache, and fatigue. Skin rash on the body  trunk,  swollen lymph glands and eye pain have also reported. Severe virus infections can result in meningitis, encephalitis or in rare cases poliomyelitis.  WNV poliomyelitis is characterized by an acute onset of asymmetric limb weakness or paralysis in the absence of sensory loss. People 50 years or older are at most risk developing serious illness as well as those individuals with underlying medical conditions such as cancer patients, organ transplant recipients or those with diabetes, hypertension, or kidney disease.  Presently there is no specific treatment for WNV. In cases of severe illness treatment is palliative and involves intravenous fluids, respiratory support, and prevention of secondary infections.

The most efficient laboratory test to detect WNV  in blood serum or CSF is an anti-West Nile virus IgM antibody ELISA and from samples collected within 8 to 14 days of illness onset . Since IgM antibody does not cross the blood-brain barrier, finding anti-WNV IgM in CSF  is a strong indication of central nervous system involvement. False IgM positives can be seen in those individuals who were recently vaccinated against related flaviviruses such as yellow fever, Japanese encephalitis, or dengue virus. PCR is used in the diagnosis of WNV infection however it is limited in usefulness because of low and transient viremia for this virus. In fact PCR detects virus in CSF in only 50% of patients presenting acute WNV meningoencephalitis.