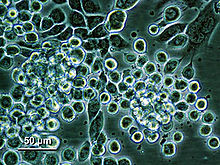 The U.S. Food and Drug Administration announced that it has approved the first trivalent influenza vaccine produced in the insect virus (baculovirus) expression system. The vaccine, known as Flublock, is produced by Protein Sciences Corp, (Meriden, Connecticut, USA) and contains three full-length, influenza hemagglutinin (HA) proteins derived from influenza virus A strains, H1N1 and H3N2, and influenza virus B strain.
The effectiveness of Flublok was evaluated in a study conducted at various sites in the United States that compared the use of Flublok in about 2,300 people to a placebo control group of similar size. The bacculovirus-derived flu vaccine was about 44.6 percent effective against all circulating influenza strains and not just the three HA strains matching the vaccine.The most commonly reported adverse events included pain at the site of injection, headache, fatigue and muscle aches but these adverse event are also typical for present day vaccines. 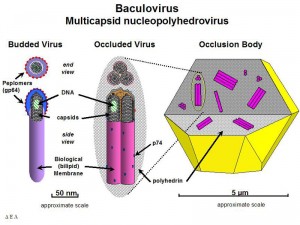 The baculovirus expression has been used in research labs since the mid 1990’s to produce recombinant human virus proteins such the influenza HA. The bacculovirus expression system can produce large amounts of recombinant glycoproteins such as HA that better fold into more “native” structures and with a proper addition of complex sugars. The addition of complex sugars to proteins is a key advantage over recombinant vaccine proteins produced in bacteria or yeast that are incapable of adding sugars or adding complex sugars, respectively, to recombinant proteins. Since baculovirus is incapable of infecting humans they could be considered a safer vaccine and should alleviate allergic reactions caused by present vaccines produced from chicken eggs, as well as lessen production costs and untimely delays seen when producing whole virus vaccines in eggs or in subunit vaccines grown in mammalian cells in tissue culture.