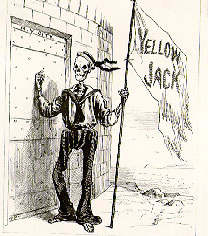 This 28th of April marks the 74th anniversary announcement of the Yellow Fever vaccine, first developed by Theiler and Smith in 1937. Yellow Fever (first coined by Griffin Hughes in the Natural History of Barbados,1750) or vomito negro (from the Spanish), whose names reflect the infection’s classic symptoms of yellow skin and black vomit, was the most dreaded of all diseases during the 17th and 18th centuries (1). European global expansion brought disease-infected slaves from Africa to the Americas and then to Europe where thousands died. Yellow fever was so feared that ships carrying the “Yellow Jack” flag were told to anchor far outside the port and obliged to keep all sailors and passengers on board ship for up to 40 days or risk being shot.

Once thought to be caused by filth, contaminated clothing or the ‘poisonous airs’ from stagnant water, it was only after the detective works of Carlos Finlay in Cuba in the 1880s and later by Dr. Walter Reed (1900) that Yellow Fever was recognized as a disease transmitted by Aedes mosquito (1). Yellow fever virus, like other mosquito-borne diseases, is yet to be eradicated and today is found in 33 countries in Africa, South America and the Caribbean Annually over 200,000 cases are reported cases along with at least 30,000 deaths (3). Yellow Fever varies in severity from one lasting 8-12 days and with mild flu-like symptoms, to a severe pansystemic form that occurs in 15-20% of infected individuals. The severe pansystemic form is generally triphasic and begins with an abrupt onset of fever, headache, myalgia, anorexia, and nausea that lasts 3-6 days. This is followed by a clinically ‘nonspecific’ phase corresponding to a peak in virus production and when infected persons are most likely to transmit the virus to blood feeding mosquitoes. After this 3–6 day ‘remission’ phase and an abatement of fever and symptoms, 15-25% of infected persons progress to a severe intoxication phase, characterized the classic jaundice skin and eyes, (jaune, French for yellow), a return of high fever, bradycardia (slowed heart rate), oliguria, (diminished urine output), hemetemesis (vomiting of dark blood) and visceral hemorrhaging. Central nervous system (CNS) involvement is seen with signs of delirium, convulsions and coma. Mortality in the severe form rages from 20-30%.

Two vaccines developed from attenuated virus strains (FNV and 17D) were developed almost concurrently in the 1930s. The FNV (French neurotropic vaccine) strain was derived after performing 128 serial passages of the an original wild-type French viscerotropic virus (FVV) in mouse brains (8). FVV was isolated form a Senegal patient in 1927 (5). The 17D vaccine strain was developed by Theiler and Smith in 1937 following yellow fever virus attenuation by 176 serial passages in mouse and chick embryo tissue cultures using the wild-type Asibi strain of virus (8). The Asibi virus was originally isolated by Mahaffy and Bauer in 1927. Neither the FNV or the TD17 vaccine virus strains are competent to replicate in mosquitos. This is an important element in the prevention of an attenuated vaccine virus reverting to a more virulent strain in inoculated individuals and prevents mosquito transmission to a naive bystander. Although nearly 40 million doses of the FNV vaccine have been given safely to West Africans, its association with encephalitis in children led to its discontinued use and production in 1961 and the 1980s, respectively. The 17D vaccine strain is now regarded as one of the safest and most effective live-attenuated viral vaccine ever developed.  The 7D vaccine has been given to over 500 million people and resulted in a significant decrease yellow fever disease worldwide. Currently this vaccine is composed of two substrains, namely 17D-204 and 17DD (2).  An improved “killed” version of the 17D vaccine has been tested (7). While unlikely to give lifelong immunity compared to its attenuated virus parent, this newer vaccine should be safer and prevent viscerotropic disease (4). Viscerotropic disease occurs in 4 persons/1 million vaccinations and cause severe viral complications matching that of classic yellow fever infection.