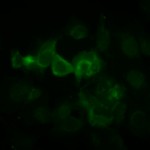 Hepatitis C virus (HCV) is estimated to infect 17 million individuals worldwide or roughly 3% of the worlds population. Over time chronic HCV infection can lead to liver cirrhosis or liver cancer. While the current combination therapy of interferon alpha and ribavirin  has proven beneficial in many patients, roughly 50% are either unresponsive or fail to achieve a sustained response. This is particularly true for HCV type 1b which is the predominant form of HCV in North America and Europe.

On May 13, 2011 the Food and Drug Administration, US approved Merck’s VICTRELIS™ (boceprevir), a hepatitis C virus (HCV) protease inhibitor. Victrelis will be used to treat HCV type 1b in combination with peginterferon alfa and ribavirin in adult patients (18 years and older) with compensated liver disease, including cirrhosis, and who were either previously untreated or who failed previous interferon and ribavirin therapy.